When people describe the Perhentian area off the coast of Malaysia as a tropical paradise they really mean it – I’ve just had a week of white sands, crystal clear waters and sea creatures galore.  Of course there was some work involved, but since it is very early on in the turtle nesting season we spent most of our time relaxing and enjoying island life. If you missed my last post, you can read the background of what I’m up to with Lang Tengah Turtle Watch (LTTW) here.

Since coming back to the mainland a week ago I’ve been extremely busy, but here’s a quick rundown of my time on Lang Tengah.

The camp base was simple but pretty comfortable compared with the situation at Bare Sand Island, a nesting beach I worked at last year. We had a sleeping hut with bunk beds, a little gas stove kitchen, and composting toilets. All our water came from a well (although this one was nowhere near as deep as Madagascar!) so a lot of our duties revolved around collecting and purifying water.   We were near to two resorts, D’Coconut and Summer Bay, which we visited quite often for the luxury of cold drinks, an outdoor shower and flushing toilet.

There are two beaches on Lang Tengah that are significant nesting beaches for the Green Sea Turtle – Turtle Bay, the beach directly in front of our camp site, and Sara Pacifica, a decent walk further down the island. Each night we would be rostered on for a 1-2 hour ‘beach patrol’ shift.  Unfortunately there wasn’t a single nesting turtle during my time on the island, so our patrols where characterised by lots of night-time walking and disappointment!

During the day we could help out with other projects whenever the camp managers needed us to.  This could be things like camp maintenance, coral restoration (more about this in a future post), shark surveys and rubbish collection at the beach. In addition to a huge volume of general rubbish washed to shore by the sea, and produced by the hotel, the jetties are destroyed every year during the monsoon season. This means that large pieces of wood are smashed into what remains of the coral reefs in the area, and every year LTTW has to work really hard to remove it. It was VERY difficult not to get frustrated by this.

The good thing about only really working at night is that it leaves the rest of the day for exploring. My favourite activity, by far, was snorkeling. There are fragments of living coral reefs around the island that host an incredible diversity of marine life. Highlights include: clownfish, a spotted moray eel, courting cuttlefish, sharks and hundreds of fish!   We also went kayaking a couple of times, jungle trekking, and cliff jumping.

I really didn’t want to leave the island since our life was so idyllic there, but I’m excited to see how my next few weeks at Tanjong Jara go! 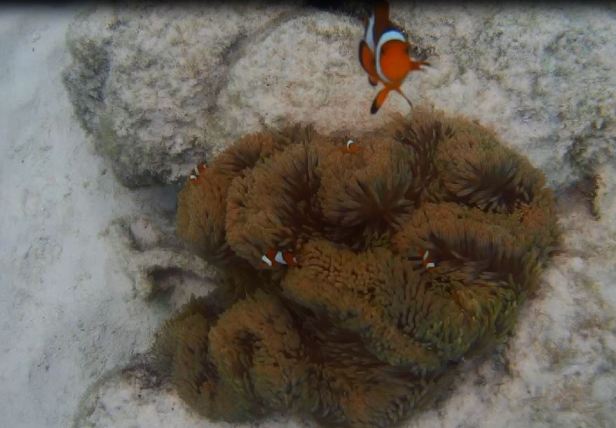 4 thoughts on “A Week on Lang Tengah”